Advocates hope the ban on ads glorifying cheap flights and gas-guzzling cars will pave the way for larger, more comprehensive ad bans across the Netherlands and beyond.

People passing through Amsterdam’s busy metro system will no longer see ads for greenhouse gas-intensive products such as gas-powered cars and cheap flights around Europe.

Last week, the Amsterdam City Council instituted a ban on these ads in the city’s subway system, which advocates hope will pave the way for larger, more comprehensive ad bans across the Netherlands and beyond.

This particular ban will impact the hundreds of large-screen TV ads that play to the 4 million weekly passengers that use the metro each week.

“We have a dwell time of between four and eight minutes at platforms,” said Radjen van Wilsem, the chief executive officer of CS Digital Media, the company that places ads in the metro. “In that dwell time, as an advertiser, you have a lot of time to tell your story.” 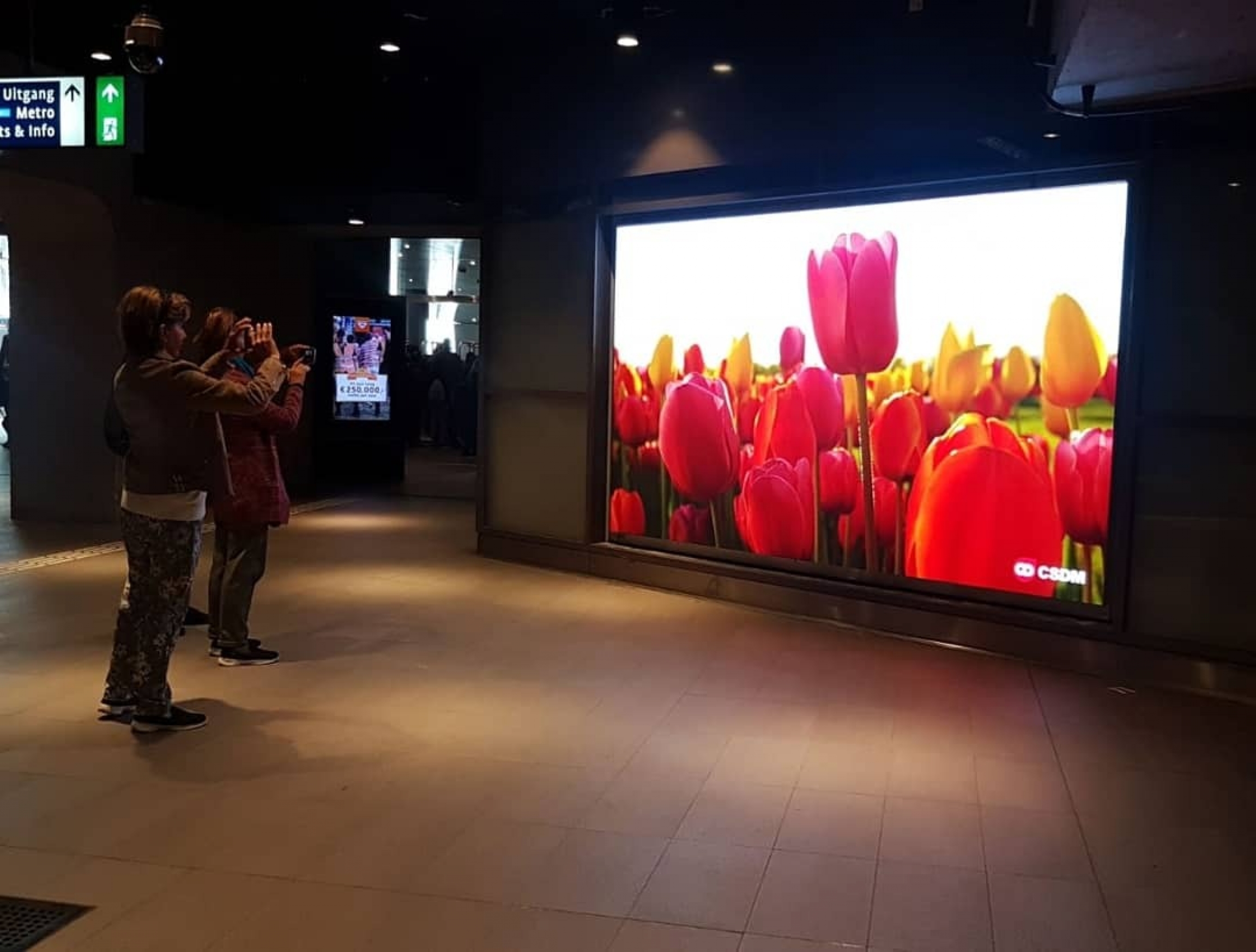 An ad for colorful tulips shines on a large-screen TV in an Amsterdam subway.  Credit:

The stories in those ads will no longer promote a fossil-fuel-loving lifestyle. About 10% of the ads will be discontinued and replaced with petrol-powered rental cars from companies like Sixt, Avis and Budget.

Car brands like Peugeot, Ford and Volkswagen can no longer promote their SUV models.

And dirt-cheap airline tickets are also out.

“We don’t tell you you can fly to Barcelona for 19 euros,” van Wilsem said. “We don’t do that anymore.”

The media company will give financial incentives for companies to advertise electric vehicles and renewable energy.

“It’s not just about the ban of fossil fuels. That was just a first step. … It’s about opening up more ad space and giving benefits to advertisers to tell how we move forward in changing the environment.”Radjen van Wilsem, chief executive officer, CS Digital Media, Amsterdam, Netherlands

“It’s not just about the ban of fossil fuels. That was just a first step,” van Wilsem said.  “It’s about opening up more ad space and giving benefits to advertisers to tell how we move forward in changing the environment.”

Van Wilsem said he expects the change to cost the company millions, but it’s worth it for their ads to be more in line with their values.

This ban was enacted by the Amsterdam city council.

“A majority of the Dutch populace accepts that climate change is a real problem and that something should be done about it.”Jasper Groen, Green Party city counselor

“A majority of the Dutch populace accepts that climate change is a real problem and that something should be done about it,” said Green Party City Counselor Jasper Groen, who introduced the ban. “But they are not at the point where the majority is willing to accept the measures we have to take, like flying less or eating less meat.”

Groen said he hopes the ad ban will start to change that.

The ban is part of a greater effort in Amsterdam to cut carbon dioxide emissions in the city by 55% by 2030.

Groen said he hopes to expand the ad ban to all public spaces in Amsterdam, and eventually beyond.

“I would hope that doing so in Amsterdam would be an example to other cities in the Netherlands or maybe other cities worldwide,” he said.

Groen said some city councilors opposed the ban on the grounds of free speech and argued that a ban on fossil fuel ads would create a slippery slope that might lead to other bans, like for meat consumption, which also contributes to global warming. 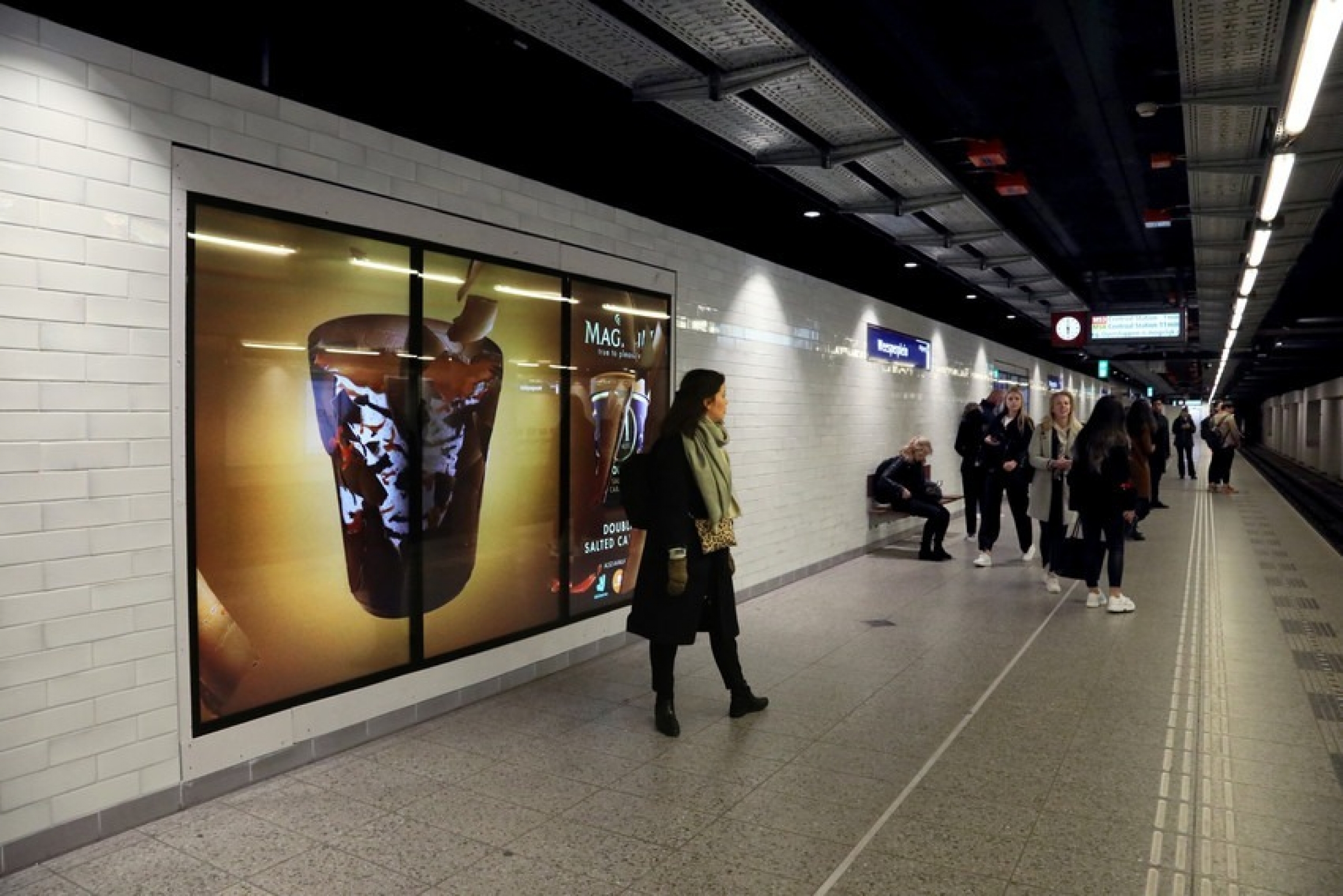 An ad for an ice cream company glows on a large TV screen in an Amsterdam metro.  Credit:

Inspiration for the ban came from an activist group called Fossil Free Advertising, or Reclame Fossielvrij in Dutch, who approached Groen about a year ago.

“We want a national ban,” said campaigner George Ongkiehong. “All ads for tobacco and smoking are prohibited, and we are striving toward a tobacco-style law.”

The Tobacco Act that passed in the 1980s in the Netherlands made it illegal to advertise tobacco products because of the harmful health impacts of smoking.

Studies from Myanmar, China, the US and elsewhere show seeing ads for tobacco leads to more smoking — particularly in children.

And ad bans have led to less smoking in many countries, according to the World Health Organization.

Ongkiehong said that, like tobacco, oil and gas are also harmful, so the government shouldn’t encourage their use.

“It makes no sense to keep advertising for something we want to get rid of fast. … How will people understand the emergency of climate change if ads for flying, cars and fossil fuel are everywhere?”George Ongkiehong, campaginer

“It makes no sense to keep advertising for something we want to get rid of fast,” Ongkiehong said. “How will people understand the emergency of climate change if ads for flying, cars and fossil fuel are everywhere?”

While Amsterdam is the first place to do this, the French Parliament is considering a similar ban. Activists in the UK, Sweden, Finland and Canada are pushing for one, too.

The city of New York filed a lawsuit in state court last month against oil companies Exxon Mobil Corp., Shell, BP, and the American Petroleum Institute, alleging they misled consumers about the connection between their products and climate change.

There hasn’t been much research on the connection between ad bans and individual actions for climate change, but Marijn Meijers, an environmental communication researcher at the University of Amsterdam, said she thinks a ban like the one in Amsterdam could contribute to subtle cultural shifts.

“It might change how we think of taking a cheap flight or taking a bigger car,” she said. “It might change the perceptions within society slowly. I wouldn’t say it doesn’t have an effect, but it might not have large, direct effects.”

However, there is evidence that when people see their government acting on climate change, it can increase their own motivation to act, Meijers said.

“[The ban] is a nice middle ground. It can green our consumption, but in the end, it can’t really stop our consumption — which would be more effective.”Marijn Meijers, environmental communication researcher, University of Amsterdam

“The whole point of advertising is selling stuff,” she said. “[The ban] is a nice middle ground. It can green our consumption, but in the end, it can’t really stop our consumption — which would be more effective.”